How to Create a File in Ansible

Home » Bare Metal Servers » How to Create a File in Ansible

Ansible is an Infrastructure as Code tool that allows you to use a single central location (Ansible control node) to monitor and control a large number of remote servers (hosts).

Use Ansible to set up a number of tasks that the remote hosts can perform, including creating new files and directories.

This tutorial covers different ways you can use Ansible to create files on remote hosts. 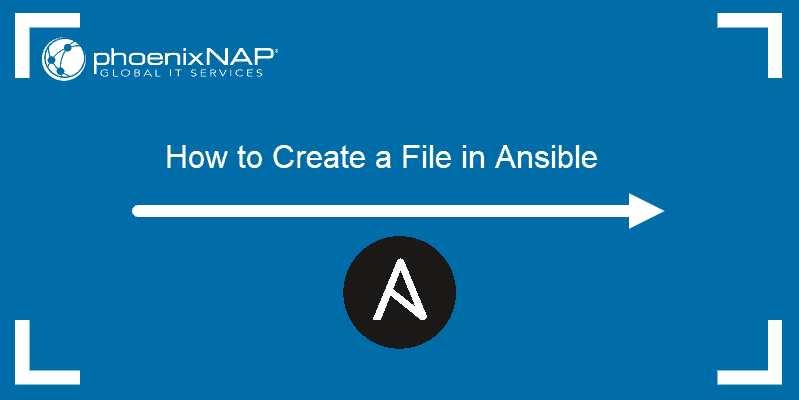 Ansible playbooks are lists of tasks you want your remote hosts to perform. They can be saved and reused, allowing you to automate complex processes.

Every command you want to issue to a remote host, including creating files and folders, is a task you must include in a playbook. Once you execute a playbook, your remote host performs all the tasks defined in it.

Note: In this tutorial, we use the Nano editor to add commands to our playbook. You can also use any other Linux text editor.

To create an Ansible playbook, use the command:

This command creates a .yaml file called ‘playbook’ in the Ansible install folder. We will use tasks in the playbook.yaml file to create files and folders on our remote hosts.

Using Ansible’s dry run feature enables users to execute a playbook without making changes to the servers. It uses the built-in check mode to proof a playbook for errors before execution.

The fastest way to create an empty file is by using Ansible’s file module.

Add the following configuration to your Ansible playbook:

The file above has the following components:

To execute the playbook, use:

If you want to create a new file with content, you can first use the method above to create an empty file, and then use the blockinfile or lineinfile module to insert content.

A quicker way is to use the copy module. Even though this module is used to copy a file from the control node to the remote host, you can include the content parameter to instantly add content to an empty file.

Use this configuration in your playbook:

In the file, we used:

You can create multiple files by using a single task in an Ansible playbook.

Use the following configuration to create multiple files:

In the configuration file above, we defined:

Creating a new directory uses the same configuration as when creating an empty file. The only difference is that under the state parameter, you enter directory as the value:

Ansible playbooks can also remove existing files. To do this, set the state parameter to absent:

If the file is already removed, this command does nothing.

With all of the examples above, you can also set the permission for new files and folders. For this, you need to use the mode parameter.

There are two ways to do this:

For example, you can use the octal value 0755, while defining the owner:

You can also use the symbolic equivalent to 0755:

After following this tutorial, you should understand the basics of setting up Ansible playbooks and using them to create new files and directories on remote hosts.

You can build from here by adding more tasks and creating complex playbooks, which will make adding large numbers of files quick and easy. Playbooks can be used to define a variety of tasks for the remote hosts to perform, including checking if files and folders exist.

Do not forget to check out how other platforms compare to Ansible in our comparison article Ansible vs. Terraform vs. Puppet.

Aleksandar Kovačević
Aleksandar Kovacevic is an aspiring Technical Writer at phoenixNAP. With a background in both design and writing, he aims to bring a fresh perspective to writing for IT, making complicated concepts easy to understand and approach.
Next you should read
Bare Metal Servers SysAdmin Web Servers
How to Install and Configure Ansible on Windows
Ansible is a Linux-based app used for monitoring and managing remote severs. There are several ways you can...
Read more
Bare Metal Servers DevOps and Development
How to Install and Configure Ansible on Ubuntu 20.04
Ansible is a management system that helps you manage a large number of servers without the need for any...
Read more
Bare Metal Servers Web Servers
How to Install phoenixNAP BMC Ansible Module
Learn how to successfully install the Bare Metal Cloud Ansible module on your control machine. Take a look at...
Read more
Bare Metal Servers DevOps and Development Virtualization
What is Bare Metal Cloud
This article provides answers to everything you wanted to know about Bare Metal Cloud and how it compares to...
Read more
© 2021 Copyright phoenixNAP | Global IT Services. All Rights Reserved.