Ansible is an Infrastructure as Code tool that allows you to use a single control node to monitor and manage remote servers.

Ansible lets you manage remote servers by creating playbooks, which contain lists of tasks for the remote servers to perform. It also provides a check mode in which you can test a playbook.

This tutorial shows you how to do a dry run of an Ansible playbook by using the built-in check mode feature. 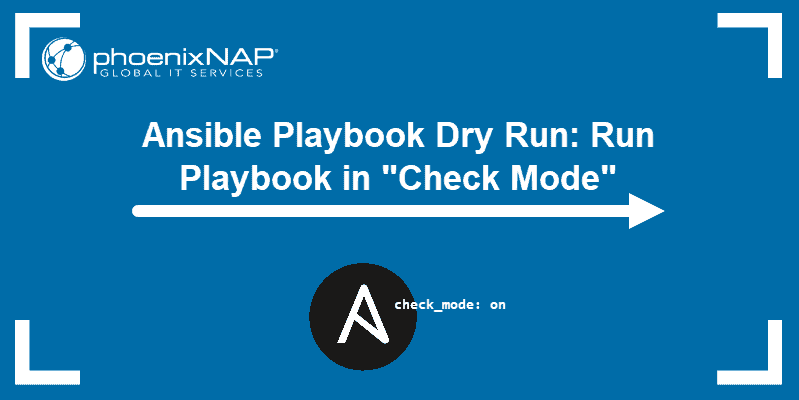 When to Use Ansible Dry Run

Using Ansible’s dry run feature enables users to execute a playbook without making changes to the servers. It uses the built-in check mode to proof a playbook for errors before execution.

This option is very useful when executing complex playbooks that contain commands which make major changes to servers. Using the dry run feature helps find fatal errors before they shut down servers and make them unusable.

Note: There are several ways to create files and directories on remote severs using Ansible.

The easiest way to do a dry run in Ansible is to use the <strong>check mode</strong>. This mode works like the <strong>--syntax-check</strong> command, but on a playbook level.

Use the <strong>-C</strong> or <strong>--check</strong> flag with the ansible-playbook command to do a dry run of an Ansible playbook:

This produces the same output as actually running the playbook, except it will report on changes it would have made rather than making them.

Another way to run a playbook in check mode is to add the check_mode parameter to the playbook content:

Using the <strong>--diff</strong> flag with the <strong>ansible-playbook</strong> command reports what changes were made while executing the playbook:

Using the <strong>--diff</strong> flag produces a lengthy output, so it’s best used when checking for changes on a single host.

Combining the <strong>--check</strong> and <strong>--diff</strong> flags with the <strong>ansible-playbook</strong> command gives you a more detailed overview of all the changes made by your playbook:

This produces the same detailed output you get when using the <strong>--diff</strong> flag, but without actually executing any of the changes.

When Not to Use Ansible Dry Run

However, if your playbook contains conditional or result-based tasks, it won’t work in check mode. This is because the conditions for those tasks can’t be satisfied without actually executing the playbook and making changes.

After following this tutorial, you should know how to use the <strong>--check</strong> and <strong>--diff</strong> flags to perform a dry run of an Ansible playbook.

You should also be able to recognize when and when not to perform dry runs.