How Does SSH Work?

Home » Networking » How Does SSH Work?

Data transmission between devices on a network needs to be regulated for devices to communicate properly. The transmission is carried out with a set of rules known as a network protocol.

Early network protocols like Telnet and rsh did not provide enough protection against malicious cyber attacks. The need for a more secure network communication method inspired the creation of the SSH protocol.

In this tutorial, we will talk about what SSH is, why it is used, and how it works. 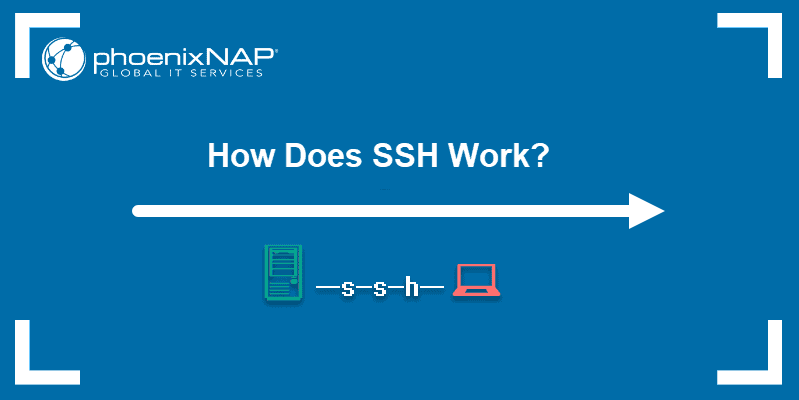 Note: The tutorial will talk about SSH2, the current version of the protocol. The original SSH is now considered outdated and less secure.

SSH (short for Secure Shell) is a network protocol that provides a secure way for two computers to connect remotely. SSH employs encryption to ensure that hackers cannot interpret the traffic between two connected devices.

What is SSH Used for?

SSH provides a layer of security for information transfer between machines. Some important use cases for SSH are:

How Does SSH Work?

SSH is a client-server based protocol. This means the protocol allows a device requesting information or services (the client) to connect to another device (the server).

When a client connects to a server over SSH, the machine can be controlled like a local computer.

The server has a designated TCP port over which it monitors the network, waiting for clients to initialize the connection. Before a client connects and starts issuing SSH commands, it needs to pass the authentication process.

Run the following command on a client machine to initiate an SSH connection:

When the server receives the requests, a session encryption negotiation begins.

Note: Read our guide on how to use SSH to connect to a remote server for a comprehensive list of steps.

Upon receiving a connection request, the server sends the client a set of supported encryption protocols. The server uses the public key as the authentication method.

The client compares the protocols to its own set. If there are matching protocols, the machines agree to use one to establish the connection.

The client compares the server’s public key to the stored private key stored in its system on the first connection attempt. If the keys match, the client and the server agree to use symmetric encryption to communicate during the SSH session. For this purpose, they communicate using an asymmetrically encrypted process that employs the Diffie-Hellman (DH) key exchange algorithm.

The DH algorithm enables machines to work together and securely create a cryptographic key over a public network. To generate a key, the machines perform the following steps: 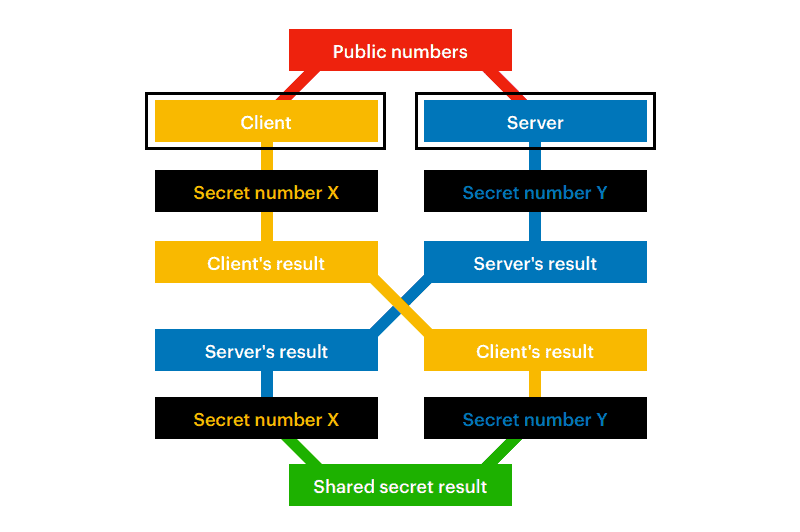 By performing the steps above, both machines calculate the same value, their secret key. Finally, the server then attempts to authenticate the user who requests access.

Asymmetrically encrypted SSH public-private key pairs are a better option. Once the client decrypts the message, the server grants the client access to the system.

To generate an SSH key pair, type ssh-keygen in the terminal. As a result, the system generates and stores the keys.

For more information about this process, refer to How to Generate SSH Keys on Ubuntu (the process is essentially the same on all Linux distros and Mac OS).

Note: For the SSH key generation process in Windows, see How to Generate SSH Key in Windows 10.

SSH uses three data encryption types during the communication between the machines. These are:

Symmetric encryption generates a single key that two machines exchange. Then, the machines use the key for both encryption and decryption. This method is quick, it is not resource-intensive, and SSH uses it for each session.

Whenever the client and the server negotiate which algorithm to use for an SSH session, they always choose the first algorithm on the client’s list that the server supports.

Data is asymmetrically encrypted when machines use two different but mathematically related keys, public and private, to perform the encryption. The client machine that participated in setting up the encryption can decrypt the information using the private key.

SSH uses temporal asymmetric keys to exchange symmetric keys, such as during the user authentication process.

A hashing algorithm uses a data packet to create a unique hash string. The machine sending the packet always sends the packet together with the hash value.

The receiving machine knows the algorithm used to create the hash and can apply it to the data. The purpose is to see if the calculated hash value will be the same. If the obtained hash value differs from the sender’s hash, the data got corrupted during the transfer.

This article aimed to give you a better sense of the mechanisms behind SSH. Understanding how SSH works and why it is useful should help you decide if you want to use it in your personal or work environment.

Marko Aleksic
Marko Aleksić is a Technical Writer at phoenixNAP. His innate curiosity regarding all things IT, combined with over a decade long background in writing, teaching and working in IT-related fields, led him to technical writing, where he has an opportunity to employ his skills and make technology less daunting to everyone.
Next you should read
Networking Security Web Servers
How to Fix the SSH "Connection Refused" Error
Fix SSH connection refused by troubleshooting some of the common causes for this problem. Take a look of all...
Read more
Security SysAdmin
How to Generate & Set Up SSH Keys on Debian 10
This article will help system administrators configure SSH Keys on Debian 10. The instructions allow you to...
Read more
Networking Security Web Servers
How to Use SSH Port Forwarding
This article demonstrates 3 distinct methods used to port forward SSH connections. It examines the syntax of...
Read more
DevOps and Development SysAdmin
How to Set Up Passwordless SSH Login
Speed up connecting to remote servers by enabling passwordless SSH login via public key authentication. In...
Read more
© 2021 Copyright phoenixNAP | Global IT Services. All Rights Reserved.