Snapshot vs Backup: The Main Differences

Home » Backup and Recovery » Snapshot vs Backup: The Main Differences

Snapshots and backups essentially have the same role. They make copies of the data on your system which you can later retrieve.

If that is the case, the main question is what is the difference between a snapshot and a backup? In this article we will explain what snapshots and backups are, how they work and what the difference is between the two. 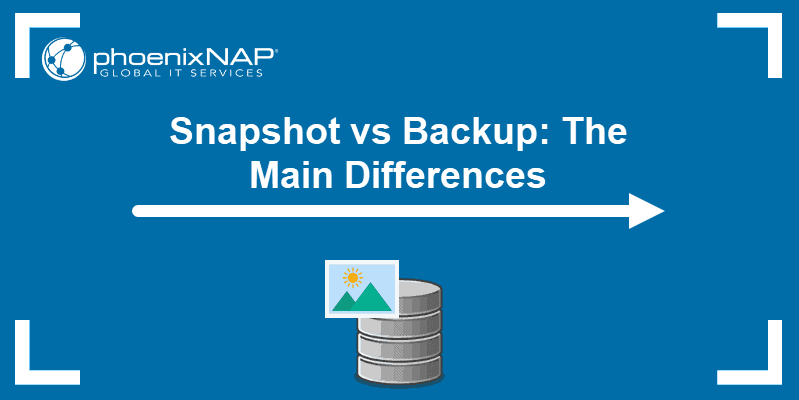 What is a Snapshot?

A snapshot is an image of your system/volume at a specific point in time.

The first snapshot is an exact copy of the given data volume. Subsequent snapshots store data blocks that have been changed or added in the meantime. This means that it can perform versioning much faster than a traditional backup.

What is the Purpose of a Snapshot?

Snapshots are usually used for version control, as well as a way to recover recently modified data. As additional ones are created, they eventually override older ones. For this reason, snapshots are not recommended as a long-term backup solution.

What is a Backup?

A backup is a copy of your entire system/volume at the time the backup was performed.

Every time you back up your system, you create a complete replicate of it. In most cases, backups are stored on a different location than the original content. As each backup takes up the space of your entire data volume(s), they require a lot of resources.

Since backups are stored separately and have their own space, they are not set up to override each other. Therefore, this practice is perfect when you need to store data for longer periods of time.

As volumes can get quite large, the time it takes to back them up can also build up. While smaller backups take a couple of minutes, large system backups could take days to perform. It is for this reason, backups are not practical to use for versioning.

Snapshots are a practical way to manage versioning and create light, easily accessible data or system versions. They don’t need a lot of storage space or time to create copies.

Backups are unique copies of a system or directory that are stored on a different, often external, location. These are large-scale performances that are done periodically as protection in case of server failure or data loss.

These two solutions are not mutually exclusive. The best practice for server security and data protection is using a backup strategy consisting of snapshots and backups. Performing regular backups with snapshots in between allows you to secure data while also staying on top of version control.

Although similar, there is a big difference between snapshot and backups in terms of how they are used and how they store data. Use snapshots for versioning and backups for storing full data backups off-site.

Depending on the data you want to preserve and the resources you have, plan out your own backup strategy and implement it.

Check out our article on Backup vs. Replication to learn more about these two methods of securing and preserving your data.

Sofija Simic
Sofija Simic is an aspiring Technical Writer at phoenixNAP. Alongside her educational background in teaching and writing, she has had a lifelong passion for information technology. She is committed to unscrambling confusing IT concepts and streamlining intricate software installations.
Next you should read
Backup and Recovery SysAdmin
How to Install & Configure Veeam Backup for Office 365
Managed Backup for Microsoft Office 365 powered by Veeam is completely independent of Microsoft's...
Read more
Backup and Recovery Bare Metal Servers SysAdmin
How to Install Veeam Backup and Replication
Veeam® Backup & Replication™ is a software solution responsible for protecting your data by performing…
Read more
Backup and Recovery Web Servers
DSC Veeam Self-Service Backup Portal Guide
This guide is a resource for all phoenixNAP clients using the Veeam Self-Service Backup Portal as a part of...
Read more
Backup and Recovery SysAdmin
How to Use rsync to Exclude Files and Directories in Data Transfer
Rsync is a Linux tool that allows you to transfer files to another location. You can customize the command by...
Read more
© 2021 Copyright phoenixNAP | Global IT Services. All Rights Reserved.