How to Uninstall or Remove Software Packages From Ubuntu

This tutorial will walk you through several methods for removing software packages from an Ubuntu Linux system. We detail removal options using the GUI (graphical user interface) built in to the Ubuntu Software Center and using the command line. 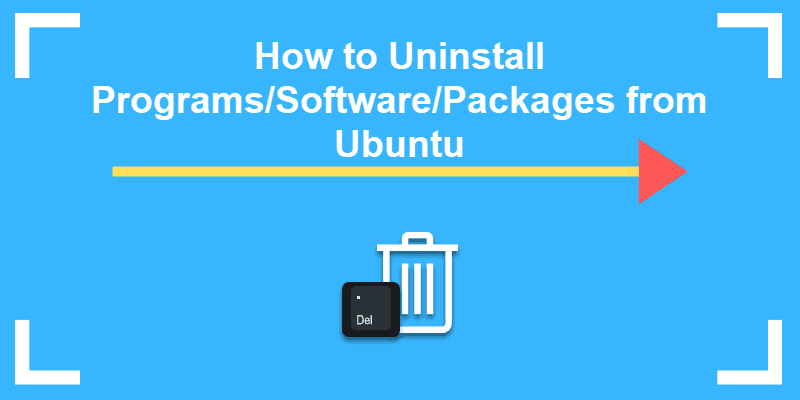 If you run Ubuntu with the default graphical interface, you may be familiar with the default software manager. This graphical tool gives a list of available and installed programs. Launch it by clicking the Ubuntu Software Center icon.

Once the utility loads, there are three tabs across the top: 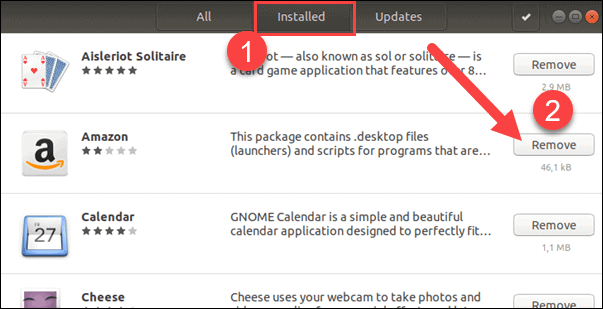 Use the Synaptic Package Manager

If your system does not include Synaptic Package Manager, use the Ubuntu Software Center to install it.

Once the Synaptic Package Manager loads, use the menu on the left to select Status > Installed. This lists all applications on your system.

To remove an application, highlight it > right-click > select Mark for Removal and then click Apply. This will uninstall the software, but leave the configuration files intact.

To delete the standard configuration files along with the software package, select Mark for Complete Removal instead. 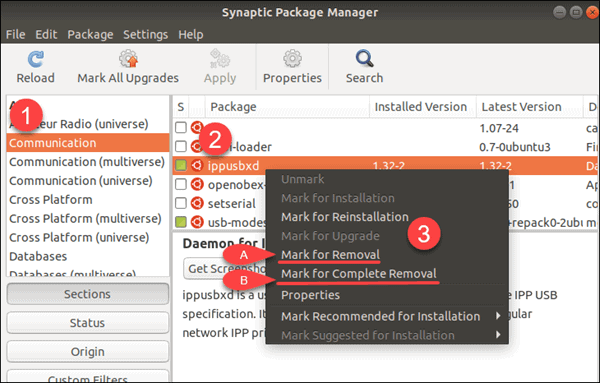 How to Remove Package on Ubuntu From Command Line

Dpkg (Debian Package) is a standard package manager in many versions of Linux. To uninstall a package with the dpkg command, you need to know the exact name of the package you intend to uninstall.

To list installed packages enter the following into a terminal window:

This command lists all the software, but the list may be too long and not helpful.

To make a list easier to browse add the following:

If you know the name of the package you want to remove, you can search for it instead:

Replace package_name with the term you are searching for.

If you don’t know the full name, specify part of a name by surrounding it with asterisks (*), as follows:

We suggest copying the exact software package name (right click and copy) for use later on in the removal process.

Note: Using dpkg to remove software packages is not recommended. The recommended option is to use a package manager that will remove all dependencies. For example, dpkg may remove the specified package, but all of its dependencies will remain on the system and may no longer function correctly.

To remove a specific package, use the apt-get remove command:

Replace package_name with the actual package name generated by apt or dpkg.

The remove command only deletes the software, not the configuration files.

To remove the program and config files, use the purgecommand:

The apt package manager can also clean up your system.

To delete the cache of old/outdated packages, enter:

Some programs are installed with dependencies. These are other software packages the program needs to run. It’s possible to uninstall an application, and still have all its dependencies on your system.

The apt package manager can remove orphaned or unnecessary dependencies with autoremove:

If you have any failed installations, broken dependencies, or corrupted package files, apt can try to repair them with the command:

Now you should have a good understanding of several ways to find and remove packages on Ubuntu Linux.

Sofija Simic
Sofija Simic is an aspiring Technical Writer at phoenixNAP. Alongside her educational background in teaching and writing, she has had a lifelong passion for information technology. She is committed to unscrambling confusing IT concepts and streamlining intricate software installations.
Next you should read
Security SysAdmin
How to Install RPM Packages on Ubuntu
RPM is a package format used by Red Hat based derivatives like CentOS, RHEL or Fedora. It gets its name from...
Read more
SysAdmin Web Servers
How to List Installed Packages on Ubuntu
Having a precise list of installed packages helps system admins maintain, replicate, and reinstall systems...
Read more
SysAdmin
How to use apt Package Manager on Ubuntu Linux
In Linux, special tools were developed for managing applications. Application software for Linux typically...
Read more
MySQL
How To Install MySQL 8.0 In Ubuntu 18.04
MySQL is an open-source relational database server tool for Linux operating systems. It is widely used in modern web-based technology, and it forms part of...
Read more
© 2021 Copyright phoenixNAP | Global IT Services. All Rights Reserved.